While many countries celebrate some version of Halloween (it started in Ireland), it is a huge holiday in America, especially for young people. For international students, many of the traditions in the U.S. may seem a bit odd. So here's a brief rundown of some of the history, current statistics, and everyone's favorite: pictures of costumes!

Halloween comes from an ancient Celtic festival (Samhain), a time when folks would light fires and dress in costumes to ward off ghosts. The festival marked the end of summer and beginning of the dark, cold times, which is why the holiday is associated with death. It would eventually become known as All Hallows Eve.

The American version of Halloween began to take shape in the colonial period, mostly in the southern colonies. As more immigrants, specifically Irish, came into the country in the mid-1800s, they brought with traditions which became known as trick-or-treating, carving pumpkins, and the wearing of costumes by the 1920s.

Photos of students and their host families and friends celebrating Halloween. 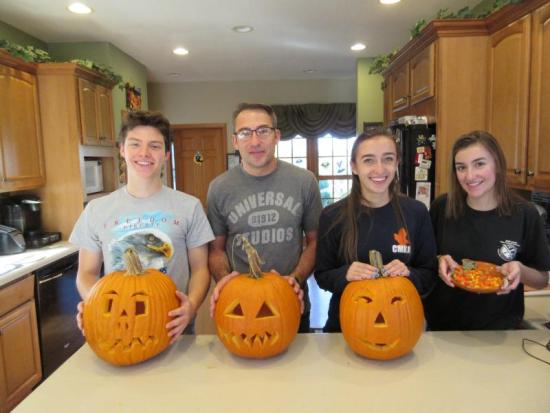 Links to some of the best spooky jams of all time.